This pass week has been very intensive. Thursday being the most with me teaching Melanie's class on how to write autistic characters and as well as helping adults during the OAADD conference. Over all my activism has been at 11 all week. Today though I'll be seeing my favorite author. So no activism today :3

However this topic isn't about those two things but about Nov 1 communication shutdown. I am honestly rather skeptical about this. Mostly because if feels like a half bake idea. Sure for one day people are going to be frazzled without Twitter or Facebook. But that's not going to illicit the empathy needed to understand the communication blocks we autists experience. Mostly because it's easy to get around also it's only got one day.

For use communication blocks are forever and not something you can easily get around. Many of use can't talk, and have trouble using computers and for us communication is an effort, but we've always seem to find creative ways of doing it and doing it well.

Honestly this idea sounds so half-baked I wonder of the NT that thought of it can really attempt to understand the frustration of speaking a language that know one could understand.
Posted by Bard at 7:09 AM 2 comments:

HOLD ON TO YOUR DREAMS~~~

I have been self medicating with this song <3
Posted by Bard at 5:41 AM No comments:

At the AutSpks protest I thought I would be strong enough to stand against the feelings of fear and hurt. Instead during wave of insults being flooded I crumbled during the deluge. There were many many moments I had to find shade and cover myself with coats to destress and cool down.

By the end of the protest I was so emotionally drained I just wanted to go home. I hard to stand strong and courageous when others think you are not good enough to.

They have no idea that I was struggling to remain verbal and clear that I was losing cognative response that I was falling apart in the most terrible way possible. They call me named and shouted at me and I could just stand their holding up signs and standing tall

While deep down I was really drowning.

This protest made me for the first time wonder why I am doing this, if what I am doing is even right. And if I am going to be swept away by the deluge of hate, ignorance and justification of genocide. Sometimes I really hate being autistic, sometimes I wish I wasn't

yet despite the feelings of fear and wishful thinking.

I never want to see my students go through what I went through and to stand against the flood.
Posted by Bard at 12:23 PM 5 comments:

Exit Though You (Fiction)

This is an old fic I did of my character Wilson. He's an original character and like Tikaani he is also autistic but with the gift of psychic powers. I will be talking more about him and Tikaani when I do my lesson on making Autistic characters.

Accident in the shower I forgot to wash my heart...now the dust has turned to mud since we've been apart.....

A feeling of emptiness settled in Wilson's gut. He wondered if this is what it's like after a break up. A gray sort of blankness that hovers around you. A kind of fog that you can't shake off but gradually it evaporates.
She wasn't really that great of a girl Wil, she had a Down Syndrome brother...she felt sorry for you. Said ever familiar voice. Not his own, but someone else. Wilson didn't know if 'Refuge' the angel that been at his side since he could remember, was really a metaphysical being, or a schizophrenic hallucination. Maybe Refuge was a little of both.
“She gave me a chance though Ref, how many girls will ever give me a chance?”
You can't just hook up with a girl because they have some vestigial echo of empathy. You could do so much better. Refuge argued, his deep and timeless voice resonated around Wilson as he leaned back in his computer chair and took off his glasses. He has been working on his thesis all afternoon. Home sick with a flu-bug, Wilson took the opportunity to finish homework. He sighed and put his square framed glasses on the oak wood desk and got up to get some soy milk. It was four o'clock in the afternoon. Wilson checked his schedule, it was time for yoga and then an hour of playing on his Wii. Wilson drank the chocolate soy milk as he walked over to get his yoga mat. Just like Refuge, he has been on well managed schedule as long as he could remember.

Mrs, Grandam it's apparent your son has autism. It's a neurological condition-
I know what it is...my younger brother was institutionalized because of it, so can you get me some phone numbers so I know what to do next?
You seem prepared for this Mrs Grandam...did you know your son is autistic?
Of course, you just confirmed the obvious, so what do I do now?

Wilson's mother never was afraid of anything. Her brother Mikkael was sent to an institution when she was thirteen, she loved her brother even after his death. She promised that Wilson will never know those walls and he will find away to overcome any odds and now Wilson was in college in Philadelphia. Yet it seems that it was obvious to his mother that he would be verbal and independent. Years of occupational therapy, ABA and speech therapy and Wilson was high functioning enough to hide his disability. Of course every day he had to tell himself to look people in the eye, don't ramble about genetics or mushrooms, don't flap your hands. He felt like a puppet on strings most of the time. Imitating people.

“Calliope said I had no empathy Refuge, that's why she broke up with me. She couldn't connect to me.” Wilson noted with a sad wryness. He arched back into a bridge position his slate blue eyes looking at the ceiling fan. He kept wondering if he was really just a puppet. When is the Blue Fairy going to turn him into a real boy?
You have empathy. You remember when your gay friend Ryan committed suicide, weren't you there holding his boyfriend his arms? Refuge recanted to Wilson as he continued to through his asanas Wilson brushed his dusty brown curls out of his face and finally collapsed into the the 'child-pose'.
“Only because KJ asked me too, and I liked KJ and yeah I was really upset, but...I don't grieve that long maybe because I still hear Ryan's voice or an echo of his voice.” Wilson's clairaudiance was rare gift, most psychic powers or gifts of divination come visually, for Wilson he could hear the dead the past and the future. It was that gift that allowed him to know that Ryan shot himself. Being called a fag for so long can do that to you. Wilson understood, how many times did the word retard do that to him?
“She also thought I needed to be medicated.” Wilson added, Refuge's retorted back.
She thinks everyone needs to be medicated. Weren't you on anti-psychotics for a while? Wilson grimaced. Those were some very quiet months, his mother took him off of it because he stopped talking, stopped doing...anything. Just made him still. Wilson checked his watch, now it was time for some Wii, he stopped for a moment and check his watch again. He washed his face and grabbed his hoodie and his wallet.
Breaking routine today? Asked Refuge as Wilson headed out locking his apartment door. He walked down the steps into the smoggy Philly air.
“Maybe...maybe I am just trying to be less like an android.”

I am sorry Wil, you're so sweet and thoughtful but, I don't think could work out. There is something about you that I can't connect with some days you feel like a robot..
Posted by Bard at 5:45 AM 1 comment: 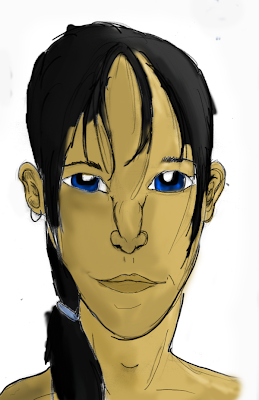 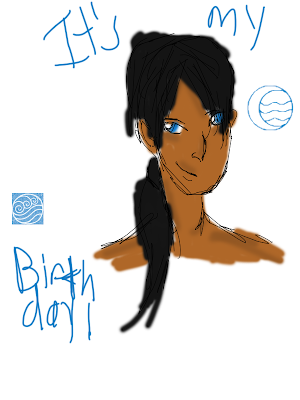 So Kim gave this last week and I feels more like I got tagged in a meme. Now I have to pick seven people to give this too when honestly I don't think I have seven people on my blog list that I can give this too and to be honest I really don't want to... I also have to give seven facts about myself.

1) I'm also a lefty
2) I have big love for pit bulls
3) I love to storm chase
4) My special interests are Avatar:TLA and Gargoyles
5) My favorite artists are Wendy Pini and Collen Doran
6) I love wearing my five toed shoes
7) And my birthday is on Monday! 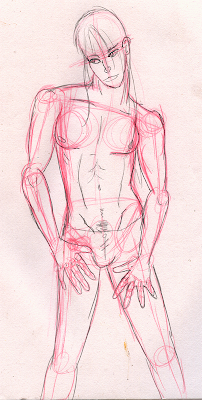 I did this at the free clinic