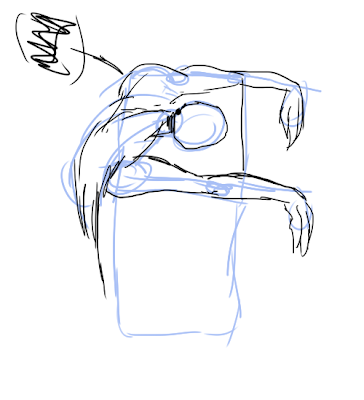 I stretched myself too thin and now I just don't care anymore. I lost any form of interest and sympathy aut-rights over the couple of weeks and it's not a surprise. The protest was exhausting and I shutdown several times over the period of a few minutes. I was stick of parents, professionals and NT in general. I am even sick of other autists besides my boyfriend and best friend Mel. I am just so tired and done with everything.

No I am not quitting the blog.

I just don't see a reason to post right now. I might take a hiatus or post Tikaani art and short stories while I recoup. But I am just done with activism. I have bills to pay a real job to do and a life to live. I am not getting paid to be verbally abused and chided by a bunch of ignorant privileged white yuppies. I might get sucked back in because I can't leave things alone, but I hope I can have a moment of peace.

Most importantly. I am sick of not being allowed to be angry. I am sick of parents telling me to be "nice". Fuck them. You go be oppressed and then we will talk. I have a right be angry, to be furious, but full rage and hate. I don't have a outlet for it anymore.

And I am starting to take it out on my peers. That's gotta go. So I am gone until my anger and rage finds a proper channel.
Posted by Bard at 6:08 AM No comments:

Guess who now is twenty five? That's right, this man of awesome.

GIFSoup
Posted by Bard at 5:19 AM No comments:

Labels: not autism, what shit is this?

The problems with calling out "Fake Aspies"

The cold is keeping me from going outside today. Thank god. Home at Josh's I read the posts on my blogger and livejournal, trying not to scream at the monitor at the bullshit that I happen to read. With the fact that my dearest love is going to brave the cold to fight off the retail wolves. I figured I should bunker down with my coffee, and blankets. I decide I should write this essay.

For the last couple years there has been a divide lately within the general blogging and LJ atmosphere. I see this a lot in “snark” communities and communities of a less douchey nature. It's what I like to call, “Fake Aspie Call Out”. It usually follows when a someone says something rather insulting or bigoted and then hiding behind a diagnosis of aspergers or autism. Thus and individual will call them out on their actions and that they are not really an aspie. Now this is a problem. I've already discussed. My ethos with Self-DX people, personal responsibility and the privileges of being off grid. But one of my irritations is this internet-hero business when a NT (normally) calls out a person and invalidates the poster's diagnosis with anecdotal proof on what a real aspie is and that they are 'self-dx' (which is like the kiss of death in a blog) because said evidence.

This is problematic in many ways. First off, you're attacking the person for what they are. Yes the poster is at fault for using their identity as a shield. You can say: “That doesn't matter! What you said was still still sexism and rather rude!” You can call them out on their actions without attacking their diagnosis or assuming they are not really on the spectrum. Yes aspies shouldn't use their DX as a shield that is true, but assuming whether they are really autistic or not is not making them realize their mistakes. It just make them more defensive and reactionary to dialogue. It also has the unfortunate side-effect of making other auties and aspies less comfortable about discussing their DX or making sure to add reassurances that they are “real aspies” and that one is “fake”. It's also feeding the age-old notion that real aspies and auties should be submissive quiet and very welcoming of Nts “helping them”. If you shout back, resist or act like an asshole; then you are not a real autist but a fake one obviously taking the DX to excuse your behavior and ruining it for the real autists out there.

No actually, what's fucking it up for folks like us is this “real” and “internet” aspergers bullshit. I am sick of aspies throwing their fellow autists under the bus (not going to lie I've done this) and Nts knowing how a real autist should act (like after being told what is what, to be very apologetic and grovel at their feet of their typical overlord), and making the self-advocates job harder than usual (it's always been a pain in the crotch really). Is diagnosis blaming bad form. Yes, absolutely. No one should use their identity as a scape goat. But I know why they do. Getting something like autism (especially late in life) is tasking and sometimes traumatic. It's so much easier to use your new DX to rationalize everything. Over time one will learn to simply accept his or her's DX and take more responsibility for their actions. I use to blame my DX, sometimes I do when very angry and reactionary. It is a bad behavior but not one that Self-DX folks do exclusively. If someone is blaming their DX for their jerk-bag statement online. Don't assume that they are attention-fiends and only use their DX for pity. Some might be newly DX and haven't come to grips with it yet.

The idea that calling out the “Fake Aspies” is suppose to help the real autists, is based on two notions. Normal people are always jerks. Auties are never jerks. The deal is that SURPRISE you can be a dick and an autist. It's important not focus on one's diagnosis, but their actions and taking responsibility for your statements and apologize when wrong should also be just as important. For an aspie, if you are unclear with something or want to say something...snarky or you simply want to call someone out yourself. Call on their actions than what they are. If you don't understand something, getting another person that knows you to clarify privately. Might be helpful.

To conclude. Don't be an asshole to one another.
Posted by Bard at 12:19 PM No comments: